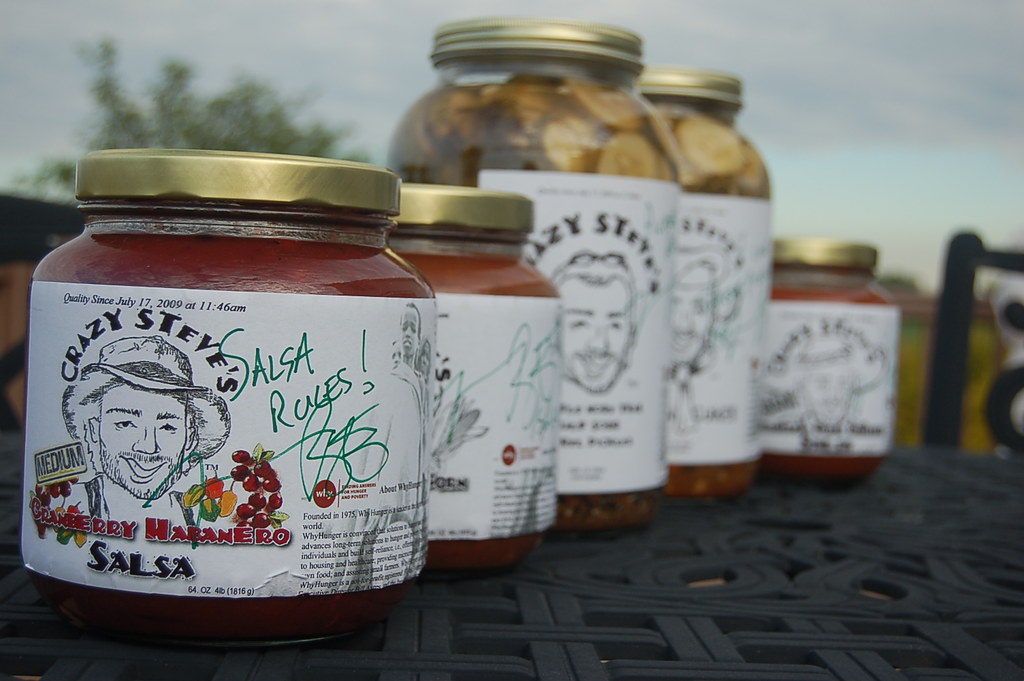 There’s a sense of lighthearted trippiness to Crazy Steve’s Pickles & Salsa website that, at first glance, can leave one wondering what this business is all about. However, upon further inspection, not to mention a friendly chat with Crazy Steve himself, I learned that these snacks are more than meets the eye. I caught up with Steve Zielinski, founder of Crazy Steve’s Pickles & Salsa, and got the scoop on this Robbinsville business with a purpose.

How did you learn how to pickle vegetables? My grandmother used to do pickling of cucumbers, green tomatoes, and everything like that when I was a kid. So I was looking to play around with that again. And I wanted to make salsa because I enjoy salsa.

How did Crazy Steve’s get started? I grew a garden last year. I can’t do anything small, so I planted umpteen cucumber plants, tomatoes, and peppers. I grew like 50 pepper plants, to the point where I had so much stuff I was just giving it away. I was bringing them in to work, I was giving them to a food shelter. I still had more, so I started pickling and jarring. People were like, “Wow, this is pretty good. Maybe you should consider selling it.” I started drawing cartoon characters, with myself on the label, and I just got carried away. When did Crazy Steve’s Pickles & Salsa start as a business? It started around the same time that I drew the date on the label, which was July 2009. I did a craft show in Metuchen last November, and in two days I sold over 160 jars of pickles and salsa. At that time, we only had three or four different varieties. I went home Saturday night after the show and I was actually making more stuff to bring on Sunday. I think I had four jars left.

How did “Highlighting a Hero” on your labels come about? Before I even started this [business], I made a music video about what was happening in Darfur. The tagline for that video was, “This is not entertainment. This is for real. Make a decision to make a difference.” So from that, I wanted to say, “OK, everybody’s got a chance in life to do something, to make a difference. So don’t just sit around and do nothing. Give it a shot.” That’s the reason why we are highlighting everyday heroes. We have different people on different jars and we’re going to keep changing that to give people inspiration and say, “Hey, listen, this could be me.” Why not?

On a lighter note, how do you decide on your flavor combinations? I was looking for that original flavor I grew up with as a kid. You know, that barrel style, deli pickle. So that was the first one we came up with, which is called A Little More Than Half Sour. It’s just what I think people might be interested in. We do something that’s sweet, a bread-and-butter pickle, which is called Let the Sunshine, and it’s made with sweet peppers, turmeric, and celery seed. We’re going to have a new seasonal variety coming out called Jersey Garden, made with only Jersey Fresh vegetables. I’m looking to create the flavor of the Jersey Shore.

When is your goal for Jersey Garden to come out? Probably around July, which is our first year anniversary.

What other new products should we be on the lookout for? We have a new variety of salsa coming out, a cranberry habañero. It’s a medium heat. I was looking for a Jersey product that’s got a little bit of heat and a little sweetness. We use raw sugar, but we use very little sugar in there. We’re looking for things that are not just for chips. When we were trying out the cranberry habañero, we wound up roasting pork loin with it. By the end of the night, my wife said, “Maybe you should run out and get ice cream and see if it works on that.” So we tried it on that.

How was it on the ice cream? I thought it was pretty good!

What’s your favorite name of one of your products? A Little More Than Half Sour. It’s a tongue twister, and it’s so descriptive. You’ve got to know what it is just by reading the label.

Have you done any flavor combinations that totally did not work? Yeah! Last fall, I was working on a pickles-and-spice variety, bringing in spices that you would get around Christmastime. What works great for cookies just doesn’t cut it for pickles.

Steve’s video about Darfur can be viewed from the “Make a decision to make a difference” section of crazystevespickles.com.

Next fall, Crazy Steve’s Pickles & Salsa will be auctioning off four one-gallon jars adorned with celebrity chefs’ autographs. The auction will take place on eBay and the proceeds will benefit the World Hunger Organization. Click here for the Pickles Against World Hunger Facebook page.