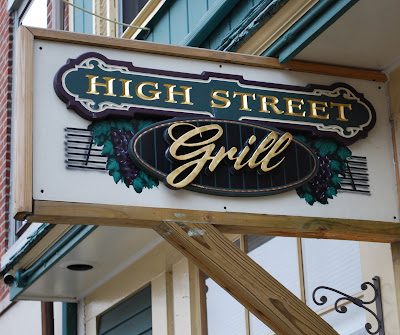 My boyfriend is a beer snob, there I said it. He plans his road trips around brew pubs and taverns known for having an excellent selection of craft beers. Case in point, we’re heading out to Pennsylvania this weekend to pick up a new puppy. My sweetheart has predictably planned our overnight stay in a town that “conveniently” has a well know brew pub. (Shocker.) 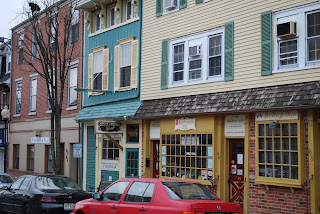 Ever since Peter stopped in at the High Street Grill in Mount Holly last year, he hasn’t stopped talking about it. The beers the food, yadda, yadda, yadda. So, on Valentine’s Day, we decided to take the drive and visit this quaint little restaurant sandwiched in between an Insurance agency and some other nondescript building in the Historic section of Mount Holly. 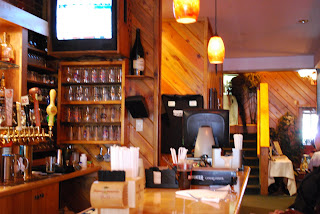 As you can see, the interior is very cozy and casual. Actually, the building is so narrow, when sitting at the bar people have to literally squeeze between the bar stool and tables to get past. I can’t imagine what it was like later in the evening. They told us they had 80 reservations. I was very glad we chose to have a Valentine’s Day Lunch. 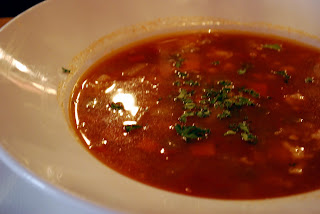 orn chowder for me. Peter ordered the special which was a Beef Chili made with Hop Back Amber from Troegs Brewery, Andouille sausage and Duck Confit.

I was warned that the corn chowder was not the creamy potato variety but more on the tomato side. Unfortunately, it was disappointing. I thought it tasted more like Manhattan Clam Chowder than corn and crab.

The chili on the other hand was a big hit with Beer Boy. The duck addition was probably a waste of time and precious duck, since neither one of us could detect a hint of duck meat, but Peter kept swooning with every bite, so I’d say try the chili.

Last on the menu for lunch was an Ostrich Burger with Blue Cheese, Bacon a 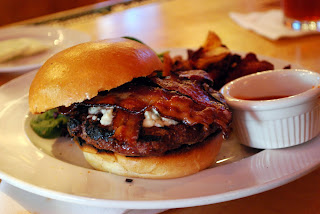 nd homemade ketchup. It was my first time trying the big bird burger and I have to say, not bad. It’s leaner and more dense than a beef burger. Of course, once you load bacon and blue cheese on top you pretty much cancel out any good intentions you may have had.

I think the High Street Grill is definitely a place to try for some very good beer and some interesting menu offerings along with more expected items like fried calamari and chicken wings. Their dinner menu looked tempting but one can only eat so much before exploding. I will have to get back to give some of their entrees a try. 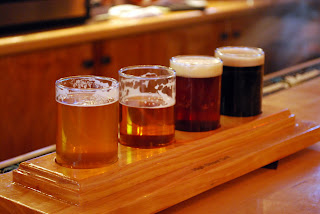 The High Street’s stated goal on their website is “to achieve and maintain the standards that have always been important to us. Food quality, ambiance, efficient service and creative menu offerings.” I’d say they meet their goals very nicely. The service was friendly and efficient and very helpful when choosing beers. It is the educated beer consumer’s hang out for sure. Check out there website for a list of upcoming events.