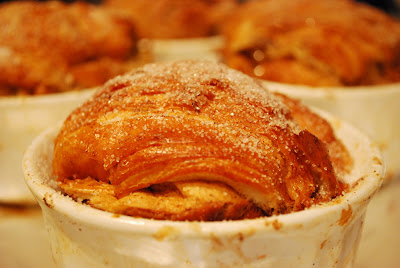 Here’s a special recipe for your favorite Valentine. The original recipe comes from Tyler Florence and calls for Brioche. Since I live in a culinary wasteland that is South Jersey, there is no Brioche to be found. Heck, it’s hard to find a bakery. I’m not saying a decent bakery, I’m saying a bakery, period.

So, I substituted Croissants and they worked great. The end result was absolutely delicious. If you’re stuck with Croissants, slice them thin. You’ll see a picture below. Save the top for the top of your Charlottes. Tyler serves his Apple Charlotte with a Cinnamon Sabayon. I didn’t have the apple liquor and since I was serving it to my kids, I opted for vanilla Ice Cream. Oh yeah!! 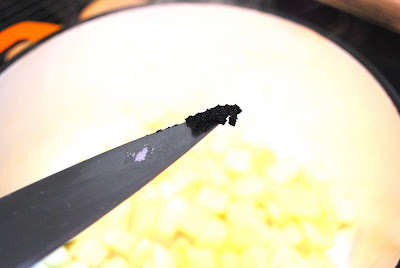 My friends at Marx Foods sent me some complimentary Tahitian Vanilla Beans since we’ll be giving away three bags of them in tomorrow’s Win It Wednesday. Now, I am not a baker and rarely, if ever, cook desert. Consequently, this was my first time using fresh vanilla beans. Not a problem, I’ve seen it done a thousand times, split the bean long ways down the center and scrape the vanilla out with the tip of your knife. Easy! I hope you’ll enter to win the Vanilla beans tomorrow and give this recipe a try. Even if you don’t win the beans, this recipe is a must try.

Begin by making the filling. Set a large saute pan or roasting pan over medium heat and add butter. Peel and cut cheeks off apples then cut into 1/2-inch chunks. Once butter has melted and just starting to foam, add apples, scraped vanilla bean and pod, lemon juice, and brown sugar and cinnamon. Toss to coat well and cook for 20 to 25 minutes until apples are just tender and liquid has evaporated. The sauce will caramelize slightly and should be a nice, rich dark color.

In a shallow dish, make the batter by combining eggs, milk, sugar, and cinnamon. Stir with a whisk until fully combined. 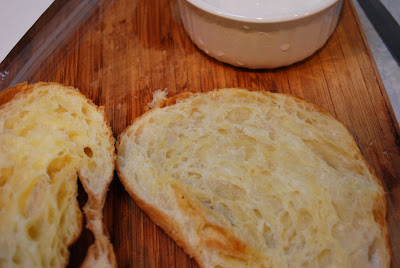 Invert a ramekin, or use a round cutter, on half of the bread slices to use as a guide to cut out circles. These will be the bases and top of the charlottes – you should have 8 in total. Cut the other slices of bread in half lengthwise.

Working with the circles. lightly coat in the batter and place in the bottom of each ramekin. Lightly dip the other rectangles of bread in batter as well, then use them to line the walls of each ramekin – standing them upright around the perimeter leaving an overhang that you will later use to fold over and seal the charlotte. It should take about 6 strips per ramekin. 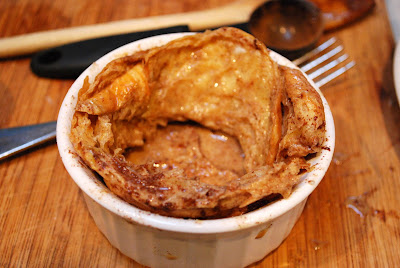 Fill each mold with apples and some of the caramel from the pan. Fold over the edges to seal it up completely and sprinkle the tops with a little sugar. 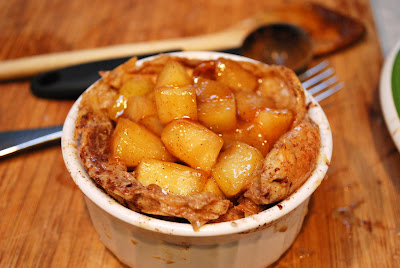 Bake in the center of the oven for 20 to 25 minutes. If the tops

brown too quickly, cover loosely with foil. When done, the bread will have puffed up slightly, the edges will be brown and the sugar on top will have caramelized. Allow to cool slightly, then run a knife around the edges and invert onto individual plates. Serve with cinnamon sabayon or Vanilla Ice Cream. 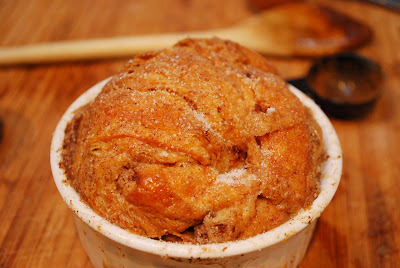