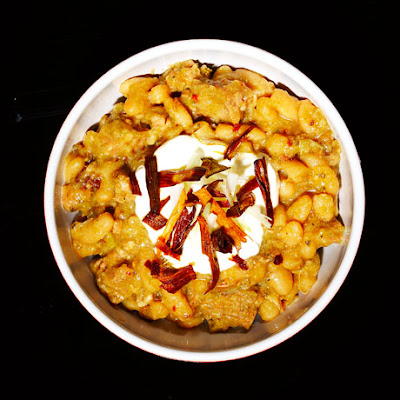 This recipe was the winner of a chili contest that Esquire Magazine held in which they invited three of “America’s best young chefs to devise chili recipes with no restrictions.”

I hope Esquire and David Bull from Dallas’ Bolla don’t mind that I monkeyed with the recipe (just a bit.)

This is an extremely hearty chili, very thick. It calls for 2 cups of dried beans which cook along with the chili for 90 minutes. The beans soak up all the chicken broth leaving it a little dry, in my opinion. I thought it could use some “loosening up”(if that makes sense). So, I added a package of frozen spinach and I sauted some baby Crimini mushrooms in butter and threw them in. End result? a much more colorful and interesting chili. My guests agreed. I served it over whole wheat pasta.

Oh, I also used Sweet Italian Sausage instead of the Hot. I thought that the 2 teaspoons of red pepper flakes would add plenty of heat, and I was right. This is a hot chili. So, if you cannot tolerate heat, use the Sweet Sausage and cut back or eliminate the red pepper flakes. 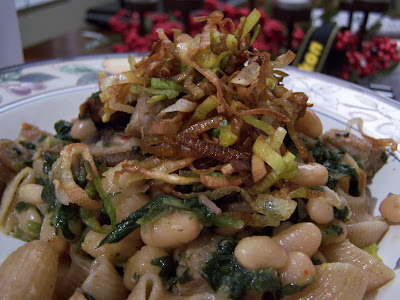 My Additions: After chili has cooked 90 minutes

1 box of frozen chopped spinach. Throw the block in frozen it will defrost right in the chili and add some needed liquid.

Film a large stock pot with vegetable oil and place over moderately high heat. Brown sausage on all sides. Reduce heat to low and cook through, 8 to 10 minutes. Remove sausage from pan and cool. Discard grease. In the same pan, add olive oil and pancetta. Render pancetta over low heat until crisp, about seven to nine minutes. Add onion and cook until soft and translucent, five to six minutes. Add garlic and sauté until golden, about three minutes. Add remaining ingredients, increase heat, and bring to a boil. Dice reserved sausage and return to chili mixture. Lower heat and simmer until beans are tender, at least 90 minutes, stirring occasionally. Season with salt and pepper to taste. Serve each bowl of chili with a dollop of sour cream and some green onions and fried leeks. Serves 4 to 6. 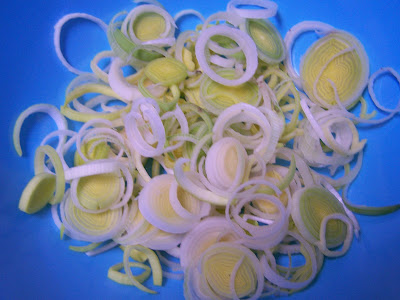 Fried Leeks: Tip (Leeks are notoriously dirty. Break up your thin slices into rings and soak them a large bowl of cold water to clean properly. Use a slotted spoon to remove, leaving the dirt at the bottom of the bowl.) 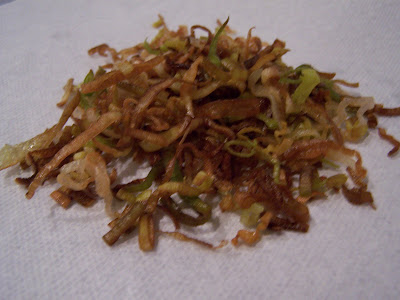