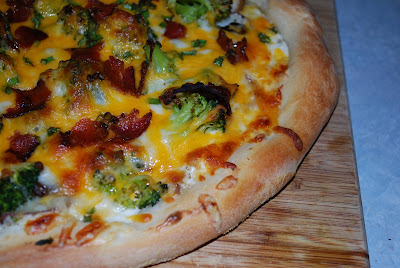 We had an impromptu Inauguration Dinner last night with some friends and their children. In preparation for our dinner, I did some research early in the day trying to find out what our new President’s favorite food might be. About all I could find was Pizza. Evidently, he’s a man of simple tastes.

While campaigning through Saint Louis a restaurant called Pi, a chicago style pizzeria, sent O’Bama and his staff some pizza’s after his speech. Later that day, O’Bama called the owner, Chris Sommers, to tell him it was the best pizza he’d ever tasted.

Pi was so pleased with the praise from our President (pretty good huh?) that he introduced a new Pizza in his Honor’s honor called the Broccoli O’Bama pizza.

I made a few adjustments to the list of ingredients and recipe, because I can’t seem to stop myself these days. I added mushrooms because I love them and thought they’d go well. The original recipe calls for a Sour Cream “dipping sauce.” I thought, why not just make a sour cream sauce for the pizza? So, that’s what I did and it was really delicious. Thumbs up from everyone. 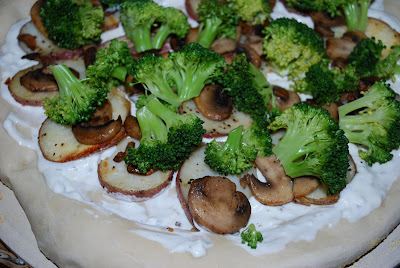 You’ve got two choices with Pizza dough, you can make the dough yourself (too much work for me) or purchase the dough raw from your local pizzaria or the Grocery store. This time around I purchased it frozen and let it thaw in a bowl on the counter for 30 minutes. It was just fine.

Preheat oven to 350 degrees. Slice red potatoes in thin, potato “chipish” slices, toss with olive oil and salt and pepper and place on cookie sheet. Back in oven until golden brown, turning once. Approximately 20 minutes. 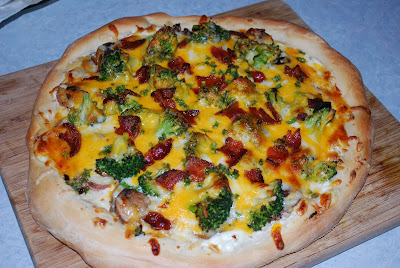 Grate cheeses, set a side.

Remove pizza stone and sprinkle generous amount of corn meal on the stone or you will need a crow bar to get that pizza off. Form your dough into a nice round pizza and use the tines of a fork to poke some holes in the center area. (much like pie crust, this will help keep it from bubbling up). Pop dough in oven for about 5 minutes. Remove dough and push any bubbles down with 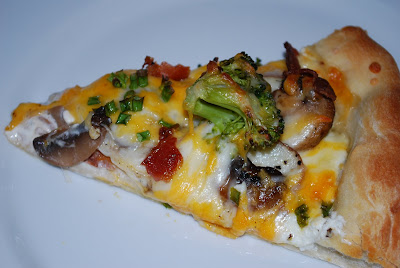 Spread sour cream mixture on dough first just like you would a red sauce. Arrange the potatoes, then mushrooms, then broccoli. Cover with cheese mixture and then sprinkle bacon and chives over top.

Bake for 15 minutes until crust is golden brown. Remove from oven and allow to cool for 5 minutes or so. Slice and enjoy.