How lucky is my boyfriend? While he sat like a king watching the Giants game and sipping his craft beer of the day, I was in the kitchen whipping up this delicious lunch.

I had a terribly dry roaster chicken from my local Foodtown. Yes, you heard me Foodtown. You guys used to have pretty decent roaster chickens. I would make it a point to shop in your store because I knew I could pick up a chicken while I was there. Now, they’re puny and practically impossible to chew. I bought one out of desperation the other day and a little less than half of it was still staring at me from my refrigerator. So, first things first, breathing life back into the old bird. 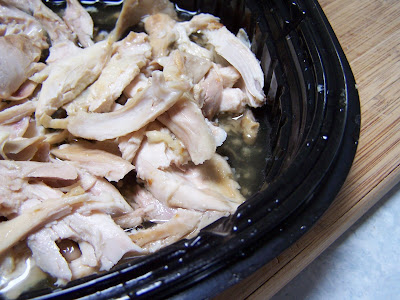 I took every “edible” piece off the bone and doused the pieces with canned chicken broth. Then I microwaved on high for one minute. Now I had semi-chewable chicken to work with. 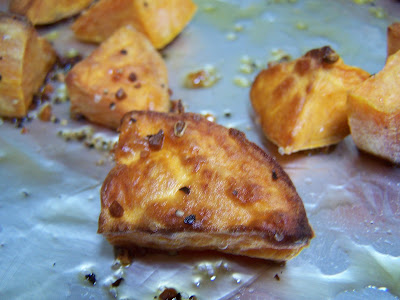 Next, I peeled and cubed a sweet potato, tossed the cubes in olive oil and sprinkled with McCormick’s steak seasoning. I roasted them in the oven for about 35 minutes on 350 degrees.

While the potatoes roasted, I peeled and chopped a medium size yellow onion and caramelized the onion in one tablespoon of butter and one tablespoon olive oil. After the onions were nicely caramelized, I added a handful of walnuts and a handful of cranberries. Saute until warmed through. Add the chicken to the saute pan along with the curry powder, salt and pepper to taste. Saute a couple minutes longer.

Transfer chicken mixture to large bowl and toss with 1/4 cup of mayonnaise. Add mayonnaise a little at a time. You may decide to use less so stop and taste.