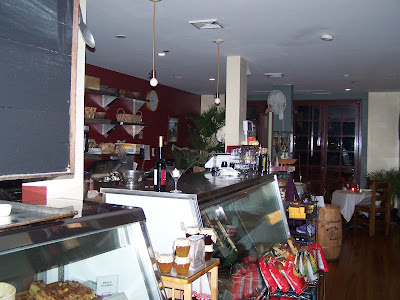 Well, as my friend, Dani, said on Friday night, “It was bound to happen.” And, I guess she’s right. As you probably know, when I do a restaurant review there’s no one ponying up for the bill but me. (Actually, Peter does most of the ponying.) So, I try to make my dining choices good ones. Consequently, I am usually writing glowing reviews. Unfortunately, this is not one of them and I actually feel bad that I have to do this.

Friday night was my first visit to Market in the Middle in Asbury Park. I had heard a lot of great things about the restaurant and felt it was about time we paid them a visit. It’s located right next door to one of our favorite places, The Brick Wall. Market in the Middle gets its name from the, yes, you guessed it, market in the middle as you can see in the picture. One side of the restaurant is a deli, the other side a bar and restaurant. Tables bridge the two sides in the back. 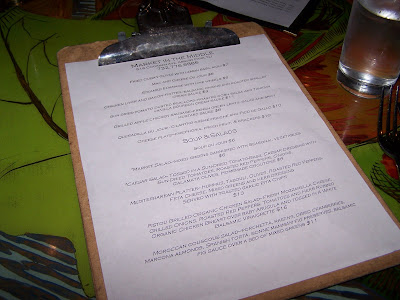 o, first impressions were good. Cute place, friendly staff.
Actually, the menu (which came on a clipboard) sounded really fabulous. I was immediately drawn to the Chicken Liver and Bacon Fritters with Balsamic Onions and Roasted Shallot Cream Sauce. Oh so decadent, I had to try them. In addition we ordered the Grilled Apple Sausage with French Green Lentil Salad and Spicy Mustard Sauce and the Quesadilla with Pepperoni. All three appetizers were disappointing. The fritters were dry and tasteless. There were only four fritters and we left some on the plate. Actually, we didn’t finish any of the appetizers.

When ordering the entrees, Dani wanted to order the Grilled Rib Eye with Sun Dried Tomato Basil smashed potatoes. She was told they were all out of the steak. This was at 7:30pm on a Friday night. 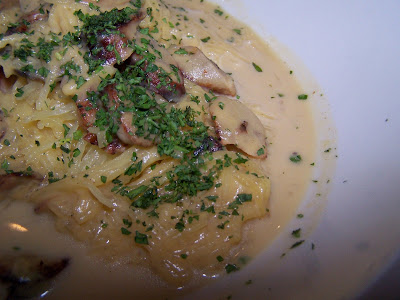 Peter and Dani opted for the Hoison BBQ Baby Back Ribs with sweet potato fries and curry mayonnaise. I ordered the Spaghetti Squash Pasta with spiced pumpkin sauce and apple chicken sausage. (See left photo) And finally, our last companion ordered the Braised Pork Shank over Barley Risotto, Cabbage, and Honey Bourbon Apple Jus. It all sounds wonderful doesn’t it? Well, some of it was pretty good. My spaghetti squash was tasty, loved the sauce. The sweet potato fries were killer. I could have eaten them all night. Unfortunately, the ribs were dry. I can only think they were cooked very early on in the day and sat around. Maybe I’m wrong, but they were very dry, none-the-less. The Braised pork shank was not cooked to perfection either but the sauce was tasty. 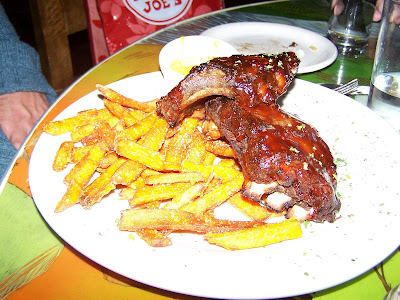 All in all, the food was disappointing. And I was so disappointed to be disappointed. I was really looking forward to a great meal. I know others have had great experiences there, so if you’re one of them, feel free to leave a comment. Were they just having an off night? Do they have a new chef? Did aliens invade and take over the kitchen? Please, solve this mystery for me.