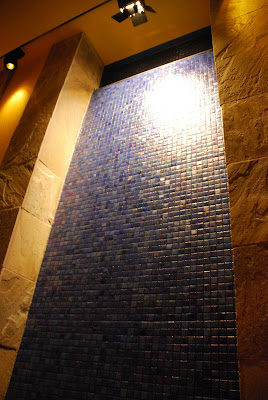 I had an amazing meal last night at the newly opened Rosa Mexicano Restaurant in Hackensack at the Riverside Square Mall. Rosa Mexicano joins an amazing selection of restaurants there: Cheesecake Factory, Houston’s, McCormick and Schmick’s, Thai Chef, Morton’s Steakhouse, P.F. Chang’s China Bistro, and Maggiano’s Little Italy. It’s the eighth restaurant is this upscale Mexican chain, their first in New Jersey. If you haven’t been to one of their restaurants before, you will be amazed. It’s like no Mexican you’ve had before. The seasonings and flavors are so complex – nothing needs to hide under a cloying enchilada sauce here.

The décor was warm and hip, like all of their restaurants, including their signature blue tiled fountains on the walls, an open kitchen, and high airy ceilings. The menu was different than the New York City locations – it had less tacos and enchiladas options. We started off with the trademark Rosa Mexicano dish: the guacamole, prepared tableside. In addition to the usual tortilla chips, it also came with warm corn tortillas and two salsas: a complex smoky salsa pasilla and a hot salsa de tomatillo and habanero chiles. I couldn’t decide whether I liked the tortillas or the chips better, and our creamy and chunky guacamole disapp 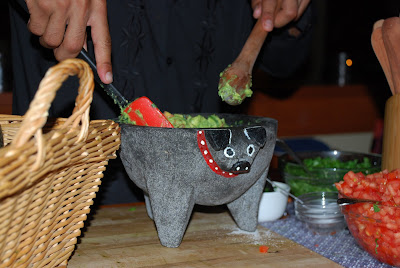 There was a large fun drinks menu to choose from (a rarity in our part of New Jersey) and we settled on the white sangria. We promised ourselves we would return soon for the frozen pomegranate margaritas. We then

had two delicious appetizers: a shrimp ceviche with pineapple and some albondigas in a smoky mole sauce. The servings were small but plenty thanks to the exotic flavors. We were already getting dangerously full after our guacamole. 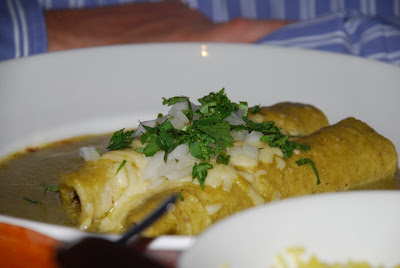 For our main courses, Steve had the Enchiladas Suizas, filled with pulled roasted chicken and smothered in a creamy tomatillo sauce and queso fresco while I had an amazing roast pig called a mocate – it was crispy on the outside, but meltingly tender on the inside. It was served with some creamed spinach with mushrooms and creamed jalapeno peppers. We also had some rice and refried beans to share. The refried beans were incredible – I know it seems impossible for this pedestrian dish to impress – but they were velvety and had amazing seasonings with hints of coffee. Even though I was beyond full, I couldn’t stop myself from eating mouthful after mouthful. 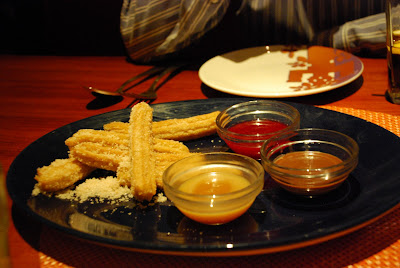 By the time the dessert menus arrived, we were seriously considering unbuttoning our pants, but we couldn’t resist the churros with the three dipping sauces. As a tribute to their street food nature, they were shaken at our table in an azure blue paper bag to be thoroughly coated in cinnamon sugar. They melted in our mouths as we dipped them in dulce de leche, chocolate and raspberry sauces. The dulce de leche was the clear winner with its fine balance of salty and sweet.

I walked away thrilled with this new addition to our local restaurants. I had the best meal I’ve had in New Jersey since I moved here five years ago. I plan on returning to Rosa Mexicano very soon to try different drinks and have more of that incredible guacamole.

Vanessa Druckman aka Chefdruck, is not a chef, as her online name suggests, just a huge food aficionado. She loves to cook and to eat out, and then to write about her experiences. Vanessa is a transplant from the big city and now resides in Northern NJ. She is half-French and spent a big part of her childhood in France, so as a result, there’s no fear of cream and butter for Chefdruck. Read more from Vanessa at: http://www.chefdruck.blogspot.com/ http://www.chefdruckwrites.blogspot.com/