I am thrilled to welcome two new contributors to JerseyBites. A husband and wife team from South Jersey, John and Lisa are fabulous food bloggers and spend every spare minute it seems seeking out new restaurants and culinary adventures in their neck of New Jersey. We are thrilled to have them join the JerseyBites family and know you will enjoy their varied “quests for food with attitude.” You will find more about John and Lisa and their terrific blog at the end of this post. 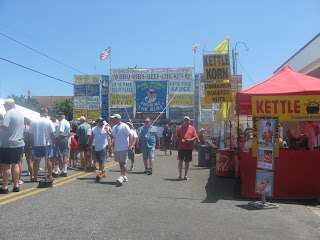 John and Lisa’s Quest for Cue in North Wildwood

When the car turned onto New Jersey Ave in North Wildwood, and the smell of smoky goodness began drifting in, we knew it was going to be a good day of eating.
Even with the headwind of $4 gas, Lisa, Jules and I took the trip down to North Wildwood last Sunday to get a taste of the 10th Annual NJ State Barbecue Champions 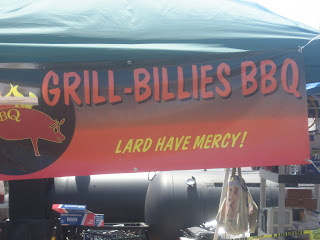 hips.
Lisa and I had seen a number of these BBQ events on TV and wanted to experience one for ourselves for a change, especially the part where we get to sample some good ‘cue.

The NJ State Barbecue Championship was a three-day event, and competitors had been smoking their ribs, brisket, chicken and pork since Friday. Sunday was Judgment Day for the competitors, and by 3PM all would be revealed.

After finding a free, legal and surprisingly close parking spot to the festivities, we took a walk around to get a lay of the land. We winded our way through the section where the ‘competition only’ teams were in their last stages. There was a strange mix of nerves and celebration going on from smoker to smoker. While one team was discussing things with a judge, another team (which included a man in a complete cow costume) was laughing and back-slapping. As much as this is competition, there’s also a sense of a lot of camaraderie between teams. When it comes down to it, these guys love to be in this environment.
Now that we had our bearings, it was time to eat. Not wanting to go overboard at any one stand, we employed the Spanish tapas bar crawl method; a taste here, a taste there, and so on. We hit Butch’s Smack Your Lips BBQ (from Mt Laurel) first and tasted their 3 ‘bones’ (ribs) sa 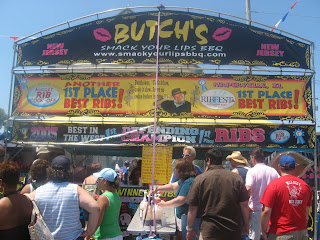 mpler. Lisa went for the mild sauce, and I opted for ‘pyro’ (not feeling ready to tackle ‘super pyro’). But really, the sauce wasn’t even necessary. The ribs just melted in your mouth with smoky, meaty pleasure, with enough bite from the dry rub to pique your curiosity. Yummy yum yum.
We then tried the brisket and pulled pork from Jack’s Down Home BBQ out of Philadelphia. Again, we got sauce for each, but the meats were just too flavorful – the sauce was almost getting in the way. The brisket was top notch; caramelized and spiced so well (words kind of fail, actually).
On our way in, we noticed a very long line for one of the stands, and we figured that we would eventually have to try their offerings. So after Butch’s and Jack’s, I got on line for Rib-Bins Bar-B-Que and their “28 Ingredients”! Lisa, meanwhile, headed off to another s 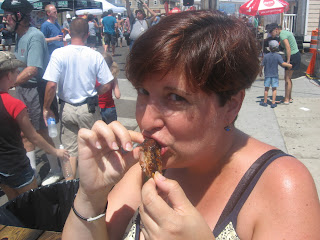 tand that had blackened scallop kabobs, with which I had no problem. I went for the 3 bones sampler platter, so I could get the baked beans and cole slaw. The ribs were pretty good, but man there was way too much sweet sauce on them. I enjoyed the slaw, though. The scallop kebobs were very good, and not a bit of sand on which to crunch.
After two hours, and several bottles of water, it was time to head back to the car and cool off. Having very much enjoyed the experience (my sauce-stained T-shirt was pretty good physical evidence of that), we have our sights set on September and the King Pig BBQ competition in Bridgeton. Can’t get enough ‘cue! 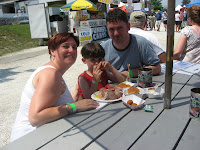 John and Lisa share a love for food and all things South Jersey. They are food enthusiasts and enjoy all types of cuisine, from low brow to high brow. John and Lisa have both lived in Jersey (and in many parts of Jersey) for pretty much all of their lives. Currently, they reside in beautiful southern Ocean County. They have one son and are expecting a second bundle of joy. Read more about their adventures in food and life at www.johnandlisaareeatinginsj.blogspot.com.