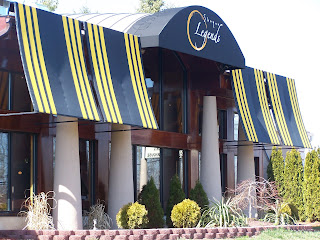 Peter and I returned to one of our favorite sushi places the other night, Shogun Legends in Wall. Why we decided to have the Peking Duck instead of sushi is a mystery. I really like their sushi and their Green Curry Chicken which we have not been able to find anywhere else in Southern Monmouth – Ocean County suburbia.

So, the beautiful bird you see in the picture was carved out of a turnip and accompanied our very large plate of Duck. Being the total Goober 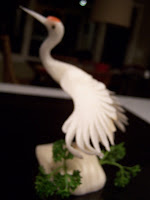 that I am I had to leave with the stupid bird so I could take a picture for this post. By the next day he looked so sad and wilted, kind of gross.

Anyway, enough about the dang bird. The duck was artfully prepared, as Peter described it, the skin looked surgically removed and then replaced in long rectangular strips. That’s part of the allure of Peking Duck, the crispy skin. The rice pancakes that came with it were like nothing I had ever had before. Very light, almost “marshmellowy” in texture but not sweet or sticky. Three sauces also accompanied the duck, if my memory serves me correctly (which is always a crap shoot) the sauces are duck sauce, plum sauce and a barbecue plum sauce.

Shogun is a huge place by comparison to any restaurant I can think of in the area. It reminds me of the restaurants in Downtown Disney, enormous. Rumor, from Red Bank Blues, is that they spent $3 million dollars to renovate it, and I believe it. The mammoth fish tank alone that separates the bar from dining area must have cost thousands.

Instead of describing the building to you, I was lucky enough to stumble on some photos taken by Tom and posted on Flickr. So, click this link and you’ll be able to check out the whole place.
http://www.flickr.com/photos/visualdistress/page2/

Peter and I are bar eaters. I guess, we find it much more entertaining than staring at each other through dinner. We have known each other since we were 15 after all. The bar at Shogun is pretty impressive, very large and elegant. I think they have at least 3 bar tenders back there on most nights.

I will add more to this string as we sample more items on the menu. Check out Red Bank Blues review by following the link above.