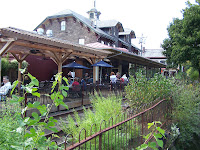 Peter and I set out on Saturday to explore the little town that lives in the big shadow of famous, crowded, touristy New Hope, PA. Yep, I’m talking about sweet, homey, quirky Lambertville, NJ. We were pleasantly surprised to find parking within minutes of entering town. Granted we had to feed the meter a fair amount of quarters, but after 6pm parking is free, so luckily, it wasn’t an all night concern.

We started our tour of town at The Lambertville Station Restaurant and Bar. (pictured above) It is probably the most well known restaurant in town located right on the Delaware River. Actually, the hotel is on the water, the restaurant is located closer to the street. We sat at the Canal Side Bar, which is their outside bar and dining area. The kitchen was closed when we arrived (great timing since its only closed between 3 and 4pm) but they did have a few items you could order from the bar. So we shared their “Trio of Appetizers” which consisted of humus, olive tapenade and chopped artichoke hearts. All of these were served with warm pita chips. Nothing thrilling, the humus really had no flavor, but it was enough to hold us over to dinner and to accompany the huge glasses of wine they were pouring. The bartender informed me that their house Chardonnay is produced by Rutherford Wine Company in Napa Valley and that the manager of the Station flies out to California to assist in the making of both the Chardonnay and the Cabernet Sauvignon. I thought it was excellent and was the best wine I had that evening. The Beer selection wasn’t bad according to my Beer Snob Sweetie. The two tap selections were Victory Hop Devil, a strong hoppy IPA and Hoegaarden which is a light Belgian white ale. The bottle selections went from light beer (yuck!) to Heffeweizen.

We asked the bartenders for suggestions on lesser known places to eat in town. It was a toss up 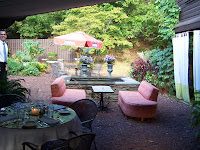 between DeAnna’s Restaurant Bar and Ota-Ya, Sushi – Hibatchi Restaurant. We chose DeAnna’s because they serve homemade pasta and I was hungry. And, I must point out that I don’t think DeAnna’s is all that of a “lesser known” restaurant. We were only able to get 5:30 reservations, so obviously, people have found out about this place. DeAnna’s, as it turns out, is located in a fairly infamous building in Lambertville. Previously, the building was home to a bar that claimed to own the worlds largest collection of animal testicles, yep, appetizing thought isn’t it. Anyway, the testicles are gone, and DeAnna’s is a lovely, quirky place with an outside courtyard as you can see. The fun part is that you enter the restaurant to give them your name and then walk back out the front door and down the side walk to the courtyard. In the back is a luscious herb garden, fountain and comfy couches by the fountain. Very cool.We decided to try the appetizer special which was smoked salmon with a shallot mouse filling. I was a little disappointed with the filling. It was a bit bland for me. Peter enjoyed it however, so the review is mixed. For dinner, I ordered the Pasta with Sauteed Chicken and Mushroom in a Gorgonzola Cream Sauce. (I told you I was hungry.) Peter ordered the Ricotta Gnocchi with Marinara. My dish was excellent, very rich of course and I was only able to eat half but took the rest home for a great lunch the next day. Peter is the Gnocchi expert and he said that it was excellent. They were smaller than normal, gumball size, but very tasty and served perfectly in a very simple sauce. The entrees were $19 and $16 respectively.

After dinner, we meandered on over to another hidden Lambertville treasure, The Boat House. A funky little shack that only serves alcoholic beverages, no food except pretzels. It reminds me more of a c 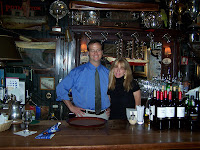 offee house, definitely not a bar. If you don’t ask someone local for directions, I doubt you will ever find this place. It is located at the end of an alley, no sign pointing the way. The only landmark is Finkles Hardware Store which is located directly across from the alley on Coryell Street. Look for the Finkels sign and head down the alley across the street. The bartender, Christian, informed us that The Boat House has been around for 27 years and is the only establishment of its kind in the state. Peter and I think there might be one other “alcohol only” bar called Boyles in Monmouth Beach, at least it used to be there. We’ll have to take a drive by and see if its still open. Don’t expect any fancy, shmancy drinks at the Boat House. Christian says they only serve “the basics” to which the waitress, Jennifer, replied “Not the basics, the Classics.” No Espresso Martinis or any other fancy martinis, just your classics.

So, that was our day trip to Lambertville. We will definitely be going back, probably to stay overnight at the Lambertville Station. There is another restaurant I’m dying to try called Hamilton’s Grill Room. It’s located on the canal and shares the alley with The Boat House. If you’ve already been please share your comments on the place or your recommendations for dishes to try.

I hope you’ll take the drive to Lambertville this fall and visit the spots mentioned here or explore some new places and send in your comments. Enjoy!